What are you looking for?

The Rise of Indian Speciality Coffee

Coffee was introduced to India in the 1600’s by Baba Budan, a Sufi mystic captured by the stimulant qualities of our beloved bean. At that time, the coffee traders of Yemen kept the cultivation of coffee a closely guarded secret as it was so popular, so our hero had to smuggle some fertile seeds out of Yemen and back to his home in the Western Ghats of India, to the area now known as BabaBudangiri…which literally means Baba Budan hill! He cultivated a small crop in his garden, and the fertile soils and climate saw an explosion of coffee growing in the area.

Specialty coffee has traditionally overlooked Indian coffees, as the quality and flavour has not had the same sort of sweetness and complexity as other prized origins such as those from East Africa or Central America. This is now changing, however. The well established coffee hot spot of Karnataka has always produced shade grown coffees with loads of body and sweetness, and now we are finding ever increasing clarity in the cup, revealing complex spice and stone fruit flavours.

India is a waking giant in specialty coffee. It has always been a large producer of both Arabica and Robusta coffee, the sixth largest in the world. 98.8% of the coffee is grown by small holders with holdings under 10 hectares, and 80.9% less than 2 hectares (Coffee Board India 2020 Database).  Traditionally, small holders sell their coffee to middle men meaning it disappears into massive regional lots and they are paid bare minimum, so there has been little incentive to focus on quality, with volume being the priority as the way of maximising the return for the years work.

In recent years various projects have focussed on improving quality and traceability.

One of these is the EKA project from one of our import partners Olam Speciality, which is focused in the Karnataka region.

Improved picking, sorting and fermentation techniques as well identifying a particular farmer or farmer group, can fetch a premium because this quality and traceability are highly desirable and the coffee is delicious.

Our coffees from both Melkodige at 100 hectares and Ratnagiri at 117 Hectares are in the top 1% of Karnataka estates by size, they are family owned and they are p 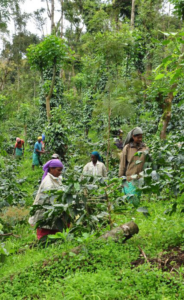 ioneering India’s drive towards world class speciality coffee. Both of these estates are in the region around Chikmagalur, one of world’s top biodiversity hotspots. The coffee is grown under three levels of forest canopy, with insanely rich biodiversity and vast experience from the team growing, harvesting and processing the coffee.

The natural process coffees we’ve had from Bagaheddal, the farm belonging to Ravi Ramu in the Shola forests in the higher hills of Bababudangiri have been going down a storm. People inhaling boozy fruity aromas and sipping on sweet luxurious brews, with a bewildered facial expression that reads: “Thats an Indian coffee?!”

We love it because it feels like we’re joining in a great mission of helping people rediscover Indian coffees, and seeing the rewards of dedication and commitment to quality are richly rewarded in the cup.

Have a browse through the Indian coffees we have on the website, however you brew coffee, there is something there you can add to your coffee repertoire and appreciation of an origin you may not have considered.

The coffee varietal nerd in me has been awakened by Indian Coffee, probably due to the romantic adventure of Baba Budan and his coffee seed smuggling antics, so I couldn’t help writing a little summary of some of the unique Indian coffee varietals.

L.R Kent was a planter in the Doddengudda Estate in Mysore in the early 1930’s. On the lookout for strong performing arabica plants, he noticed that one particular arabica plant was particularly resistant to leaf rust. He isolated it, took cuttings to grow, and soon this varietal was in widespread use across India, giving a good quality arabica coffee that had good resistance to disease.

Was developed by Indian Coffee breeders in the 1940s, crossing Kent with Liberica hybrids, to develop resistance to coffee leaf rust, whilst maintaining good cup quality. Naturally occurring hybrids of coffea liberica and coffea arabica were discovered on the Doobla Estate in India, showing good disease resistance, but a high amount of defective beans. When this S288 variety was crossed with Kent, it produced good volume with much more consistent quality and was very hardy, and thus became popular with coffee farmers who replaced their Kent varieties with the S795.

The Chandragiri varietal was introduced into India for commercial cultivation in 2007, in response to coffee farmers’ concerns with the spread of White Borer Disease, which can decimate crops. From the early 70s, The Coffee Board of India observed a decline in the amount of Arabica being produced, as farmers switched to the hardier Robusta species, which resists disease but produces a much inferior coffee. The Chandragiri varietal is an Arabica that crosses Villa Sarchi,  a natural mutation of the highly prized bourbon, with Hybrid de Timor, a hardy hybrid of Arabica and Robusta. This gave farmers the opportunity to grow a coffee plant that was resistant to disease and also produce a tasty coffee.

An Indian sub variety of Catimor, the Cauvery coffee plant is a hybrid descendent of Caturra (a natural mutant of the high-quality Bourbon variety) and Hybrido-de-Timor. Released in 1985, the cauvery coffees we have tried have distinct spice characteristics as a result of being intercropped with pepper.

The Selection 9 coffee plant is a hybrid between Tafarikela (an Ethiopian Arabica collection) and the sturdy and resistant Hybrido-de-Timor. It boasted of all the superior cup quality traits of Tafarikela. It won the Fine Cup Award for best Arabica at the Flavour of India – Cupping Competition 2002 organized by Indian Coffee Board.

You can find out more about which cookies we are using or switch them off in settings.

This website uses cookies so that we can provide you with the best user experience possible. Cookie information is stored in your browser and performs functions such as recognising you when you return to our website and helping our team to understand which sections of the website you find most interesting and useful.

Strictly Necessary Cookie should be enabled at all times so that we can save your preferences for cookie settings.

If you disable this cookie, we will not be able to save your preferences. This means that every time you visit this website you will need to enable or disable cookies again.